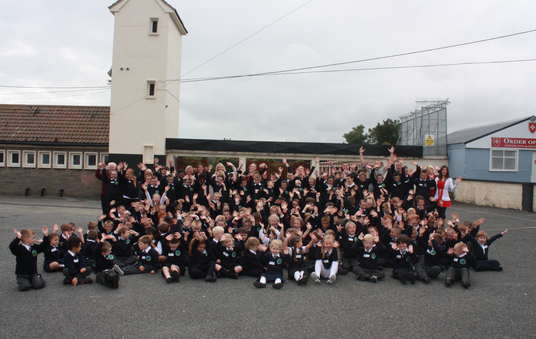 St Peter’s welcomed boys and girls into all classes – from Junior Infants to 6th Class – for the first time in 2014.

The ‘new’ St. Peter’s Boys National School on Hawthorn Road in Bray was as modern as they come when it opened in 1961. With five spacious classrooms, large toilet facilities, a cloakroom, boiler heating system, an enormous playground with a shelter and seating; it must have been sheer luxury, compared to the old school which the children and teachers had left that cold bitter cold November day.

The old St. Peter’s National School was also in Little Bray, adjacent to St. Peter’s Church off the Dublin Road – in fact, the old premises is now part of the Parish Hall. It was originally built in 1844 and opened in 1849 as a school, but the building was rebuilt in 1874 on the same site of the older school, which collapsed during renovation. Boys were taught on the ground floor, while girls were taught on the upper floor. The playground for the school was the churchyard in front of St. Peter’s Church, and for years the large ‘conker trees’ in the yard would keep many a child amused throughout playtime and after school.

The 22nd Report of Commissioners, published in 1855, stated that there were 191 ‘average number of Pupils on rolls’ at ‘St. Peter’s National School for Boys and Girls’ in Little Bray. Of these, 74 were male and 117 female. By the 29th Report, in 1862, there were 299 – including 160 boys and 139 girls. Mr. L. Phillips was the master for boys and Miss Margaret Doolin for the girls. There were four classrooms – two upstairs and two downstairs, the toilets were on the left of the main entrance and there was a small cloakroom too. A section of the building was used as a savings bank for the parish of Bray, Delgany and Powerscourt.

The Sisters of Charity came to Bray in 1886. They moved to Rackrent House on the Dublin Road (around the corner from the school on the Dublin Road) on the Feast of the Assumption in 1896. They gave religious instruction to the children at the school. In April 1897 sixteen were consecrated Children of Mary. The Sodality of Christian Mothers was inaugurated in March 1900.

As their work continued to progress – and with the lady principal of ‘St. Peter’s National School for Boys and Girls’ retiring – the need for larger premises was recognised, and it was therefore decided that the girls from St. Peter’s would move to Ravenswell and be educated there. So in April 1901 Ravenswell, a former residence of Lord Meath, was acquired by the Sisters. Ravenswell contained many buildings and had a lot of land attached to it, so they immediately set about converting the stables into school rooms which accommodated 300 pupils. All the time the sisters also gave instruction in the now all-boys’ school at St. Peter’s Church.

St. Peter’s (Boy’s) National School in Little Bray saw many students (and indeed teachers!) come and go through the large iron gates which guarded the entrance to the school (and church) complex.

However, the school could not remain at its previous site forever. New factories and other businesses began to open around the town, also began to attract its fair share of tourists, so new housing estates began to pop up all over town – especially in Little Bray, where the Dwyer Park and St. Peter’s Road developments were completed by the late 1940s. With an even further development at Palermo underway, there was urgent demand for more space for schoolchildren – and that St Peter’s needed to move to a bigger school.

In the early 1950s a site for a new presbytery on Old Connaught Road was acquired, and land for an extension of St. Peter’s Cemetery had also been obtained in 1954. By arrangement with the Town Council, part of the extension land had been ceded in exchange for a school site in the Palermo area.

It was to be an end of an era for the school in the churchyard, as on November 22, 1961 – after the special mass celebrated by Archbishop McQuaid – the boys and teachers made the ‘big move’ up the Chapel Lane, Beech Road, past Ledwidge Crescent and to the new St. Peter’s Boys National School on Hawthorn Road.

However, the five classrooms in the new school were a short-sighted plan, as a prefab building had to be constructed in the rear playground area for additional space soon after the new building opened. Meanwhile, Bray Urban District Council purchased more land from farmer Billy Castle and more housing (later to become Roger Casement Park and James Everett Park) began construction. By the 1970s the new classrooms were overcrowded and even more rooms were badly needed, so three new extensions were added to the east end of the school. This left the new building with six new modern classrooms, an assembly hall, kitchen, toilets and a staff room.

In August 2014, we became a fully vertical school with both girls and boys in every class, from Junior Infants up to Sixth Class.

In September 2016, we moved into the new build of our school, which includes the creation of five new classrooms, new special education rooms, more girls’ toilets, a bigger staffroom and additional upgrades to our existing building.

We also opened our sensory room in May 2017, making St. Peter’s Primary School an even more nurturing and inclusive school than ever before. 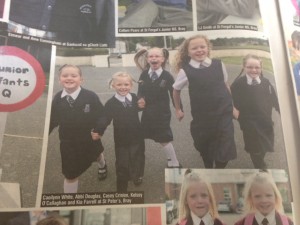 In August 2013, these five became the first girls to ever enrol in St Peter’s, joining 2nd class.